How Was The Ding and Darna Experience? 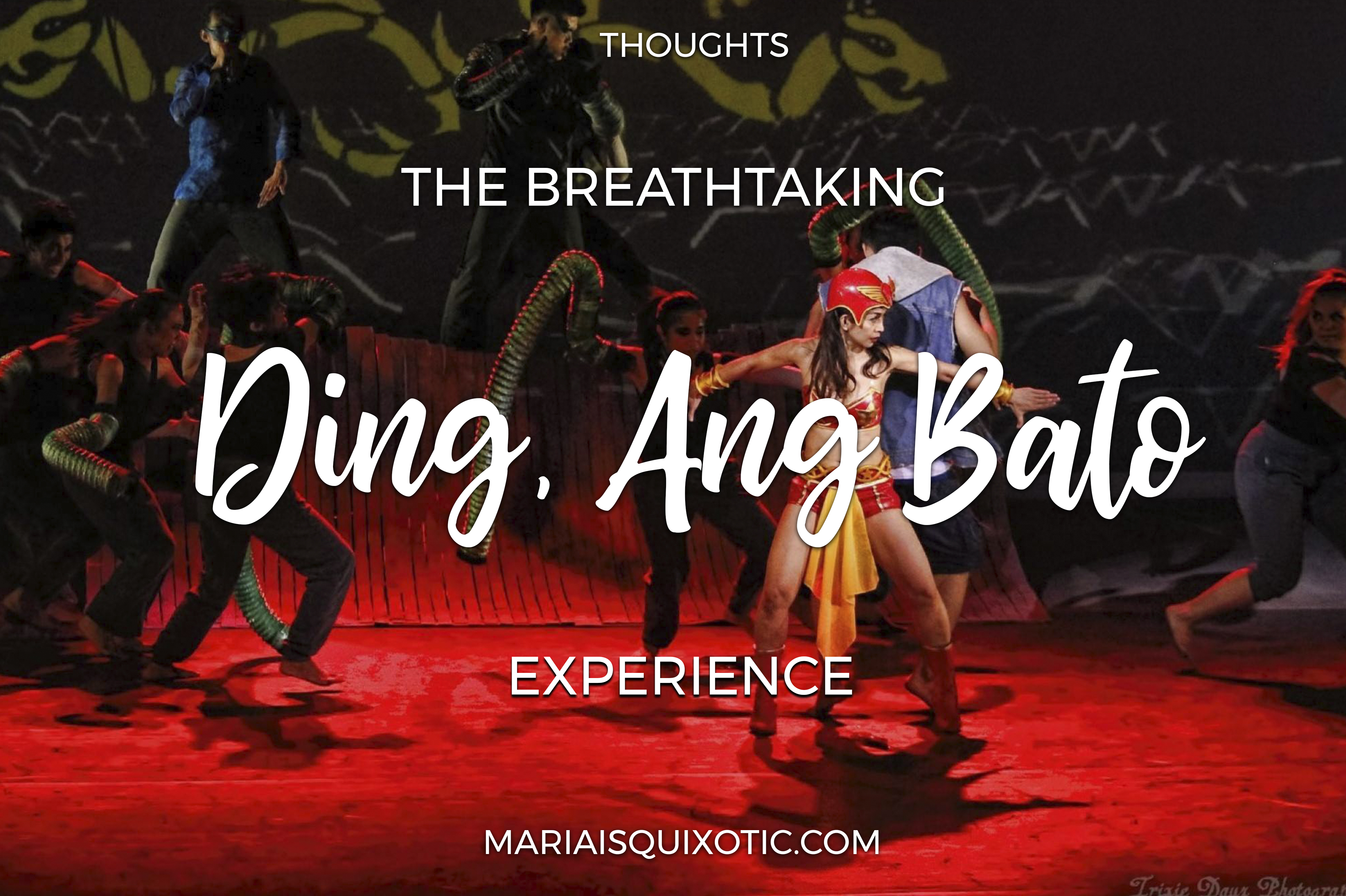 Back in May, we were invited to see Ding, Ang Bato which is a theatrical show. It told the story of Darna from Ding’s perspective. But, how was it?

The Ding and Darna Experience

Last May, I was able to watch another theatrical show which told the story of Darna. Her story is one of the most iconic stories here in the Philippines. Various generations know about her story because it has been immortalized through comics and numerous films.

My family knows about her and even her alter ego, Narda. Ding is Narda’s brother and number one fan (I think). I admire their bond because, in the tv series and movies depicting them, their bond is one of the strongest that I have ever seen in my life.

I admire their story as it gives hope to almost anyone who hears about it or even sees it. If the others have Superman as a beacon of hope. Filipinos have Darna as their beacon of hope.

Also, this review was supposedly be done by last week of May to the first week of June however, I was preoccupied with school and work. Then, I thought the domain transfer will be quick but my blog has been down for a number of weeks. Thank you to Ms. Grace, I was able to access it just before July passed by. 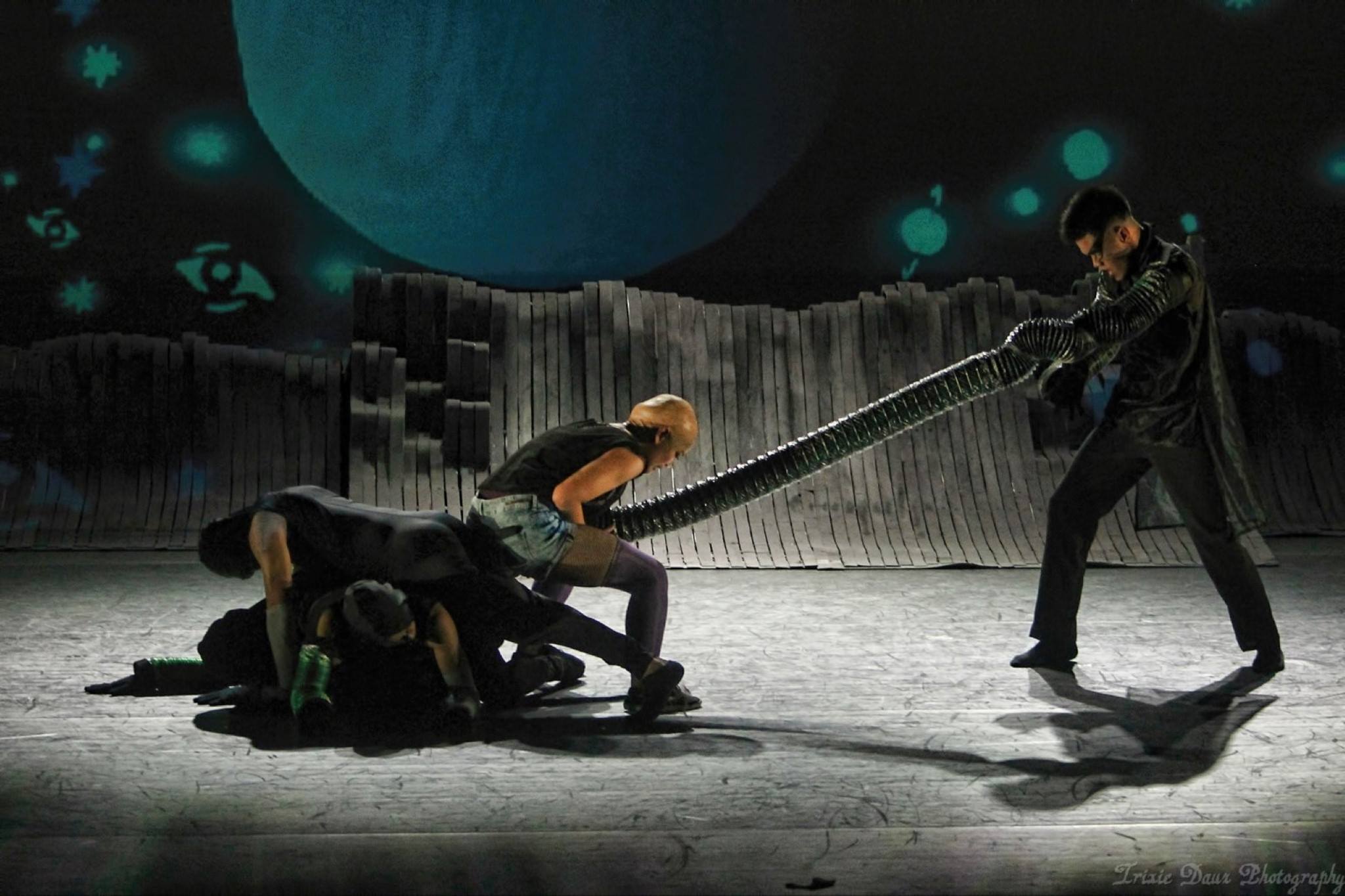 The shows were held at the SDA Theater in the School of Design and Arts Building of De La Salle – College of Saint Benilde. Honestly, the experience gave me a trip back in time since it was in the same school where I studied even though I am from a different campus. SDA is the home to diverse creative Benildeans.

The shows I watched were of different kinds. One was the gala night and the other was just a normal 7 pm show. The gala night had so many people attending it. One of the highlights was the chance to see the history of Darna. We saw the timeline of how it was presented by different people. Now, I am happy to see that there is a game based on her story and adventures! I’m just sad because I was not able to try it nor buy it. 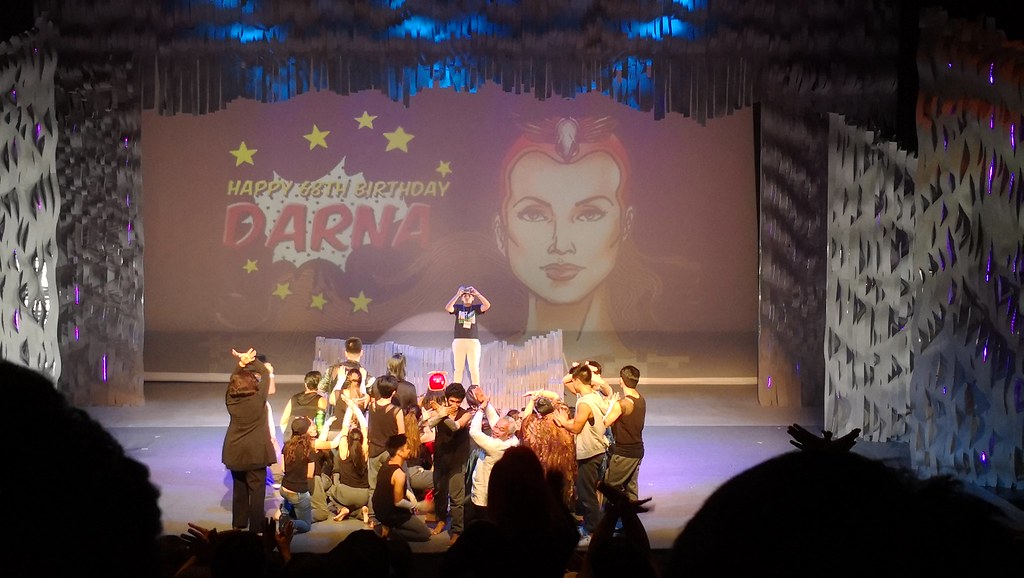 The gala night was well received as it had catered to so many people. Family members from the Ravelo clan were given priority seats as they were part of something legendary. Other spectators were allowed to choose where they wanted to be. It was a first come, first serve basis.

On the other hand, the 7 pm show on a different date catered to different types of people. Some were students who really love the theater and the story to be presented. Others were also students who watched because it was a requirement for a class. Ah, the good old Ordev classes that turned into CSBLIFE or CSBGRAD through the years. By that, you may as well guess my age and ID number. 🤣

What I hate with some members of the crowd back then, they were not sensitive to the theater rules. Some were a bit too noisy during the show and disrupted us from hearing the lines well. Good thing, one of them hushed them. They quieted down after that.

Generally, I love how theatrical shows are receiving appreciation and love these days. I always think that theatergoers are diminishing in number but when I went to see their show. It made me jump up and down (not literally) with excitement as I look at those faces. 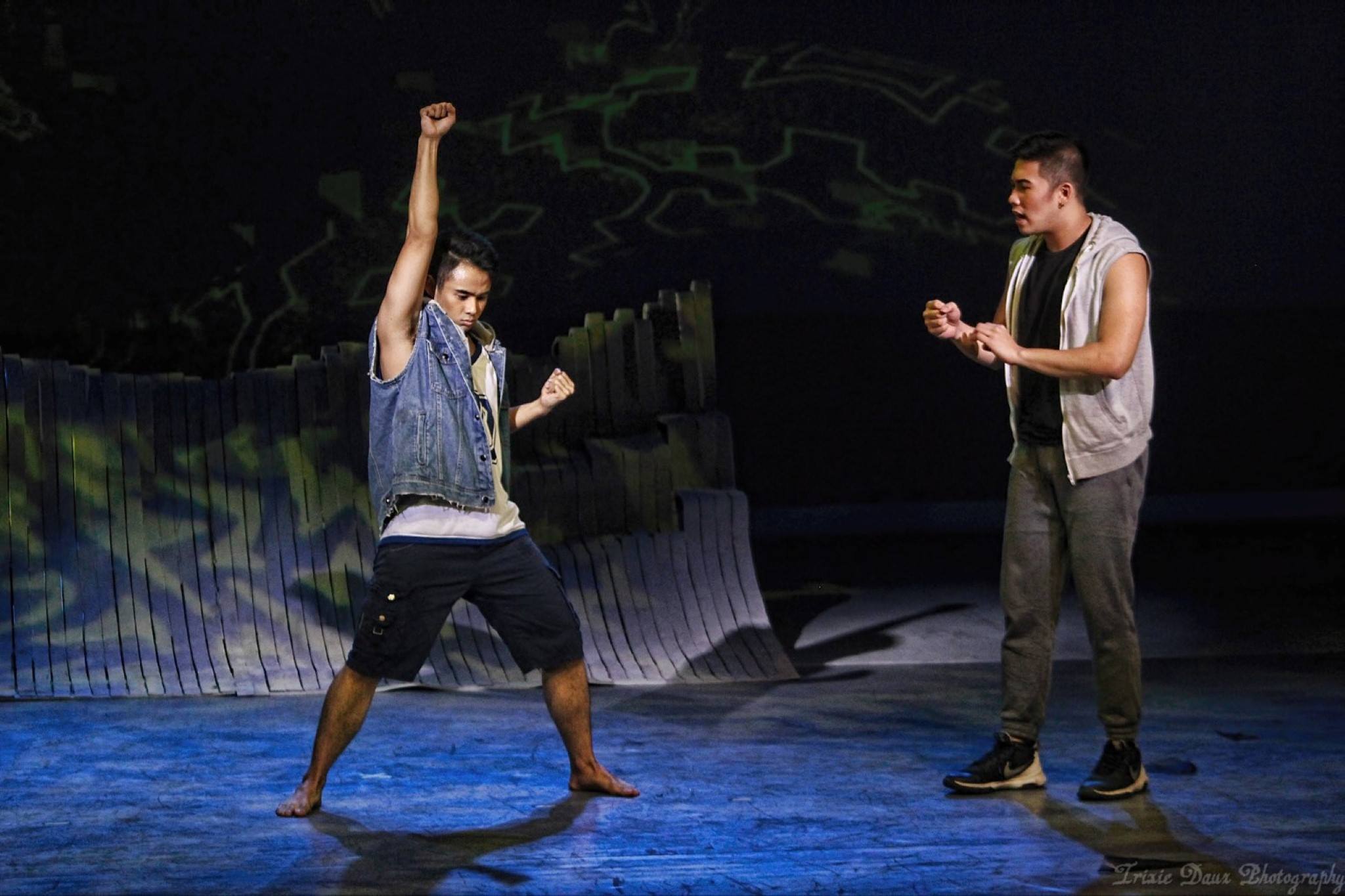 At first, I did not realize that the story was already from his perspective. The story gives a sense of fantasy as it incorporates the dwarves and elves. Those are constants when it comes to a Filipino folklore or fantasy story.

It is very evident that the most common Filipino values such as camaraderie and respect for elders were also included in the show. Not only that, but they are very creative to include the current events happening in the country. This thing they did is very eye-opening especially to those who are just passive about the current issues in the country.

Shows like this open the eyes and hearts of the audience to the reality that is going on within the country. 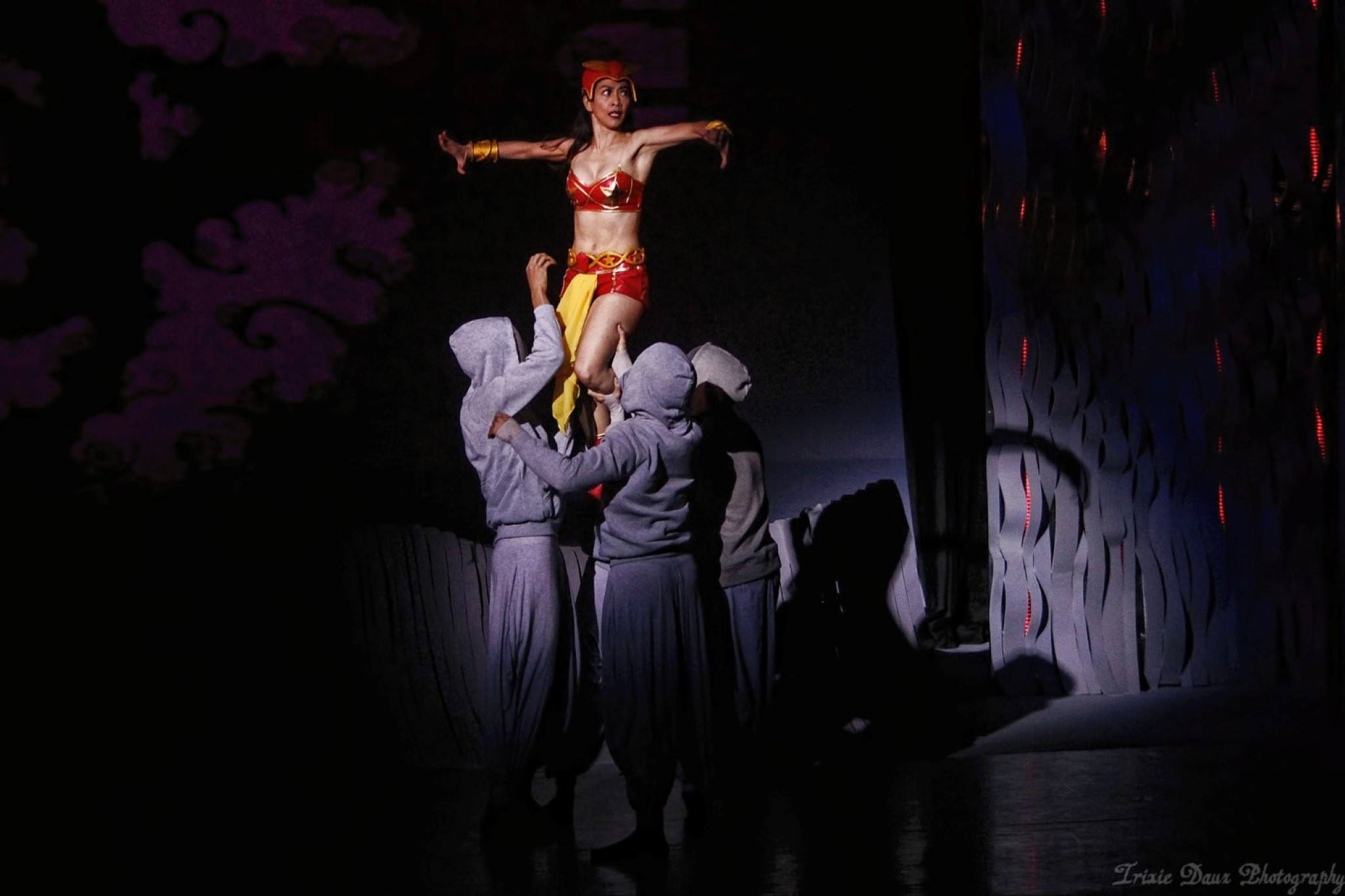 Flying in! | Photo by Trixie Dauz

This always is a puzzle to me. I know how tv and movies make flying characters or heroes seem so easy. They incorporate effects that would make flying seem so easy. Various harnesses are used by the actresses or even the actors whenever they film the production.

Just like any being who has not seen it a theatrical show about her, I kept on thinking how will they do it. They have lifters who used their might to lift her are the harnesses used in films. It is a pretty magical sight when you get to watch it live!

At random times, I still think about the wonderful experience of seeing another person “fly” with the help of other people too.

I hope that other people will get to appreciate and see more theatrical shows. It is different from tv shows and movies. They are here to tell a story and to amaze our guts.

Each and every person who lurks on this Earth should be able to at least experience even one theatrical show and see the magic that it gives.

Lastly, I want to thank and congratulate the whole team behind it. As a Benildean alumna, I am proud to say that I love this show from the bottom of my hypothalamus!

So, what do you think about this type of storytelling? 😃

How to Beat the Creative Demotivation?

February 26, 2021
Previous Post Life Lately: Embracing Another Chapter
Next Post What to Blog About Next? Blogging Prompts #6