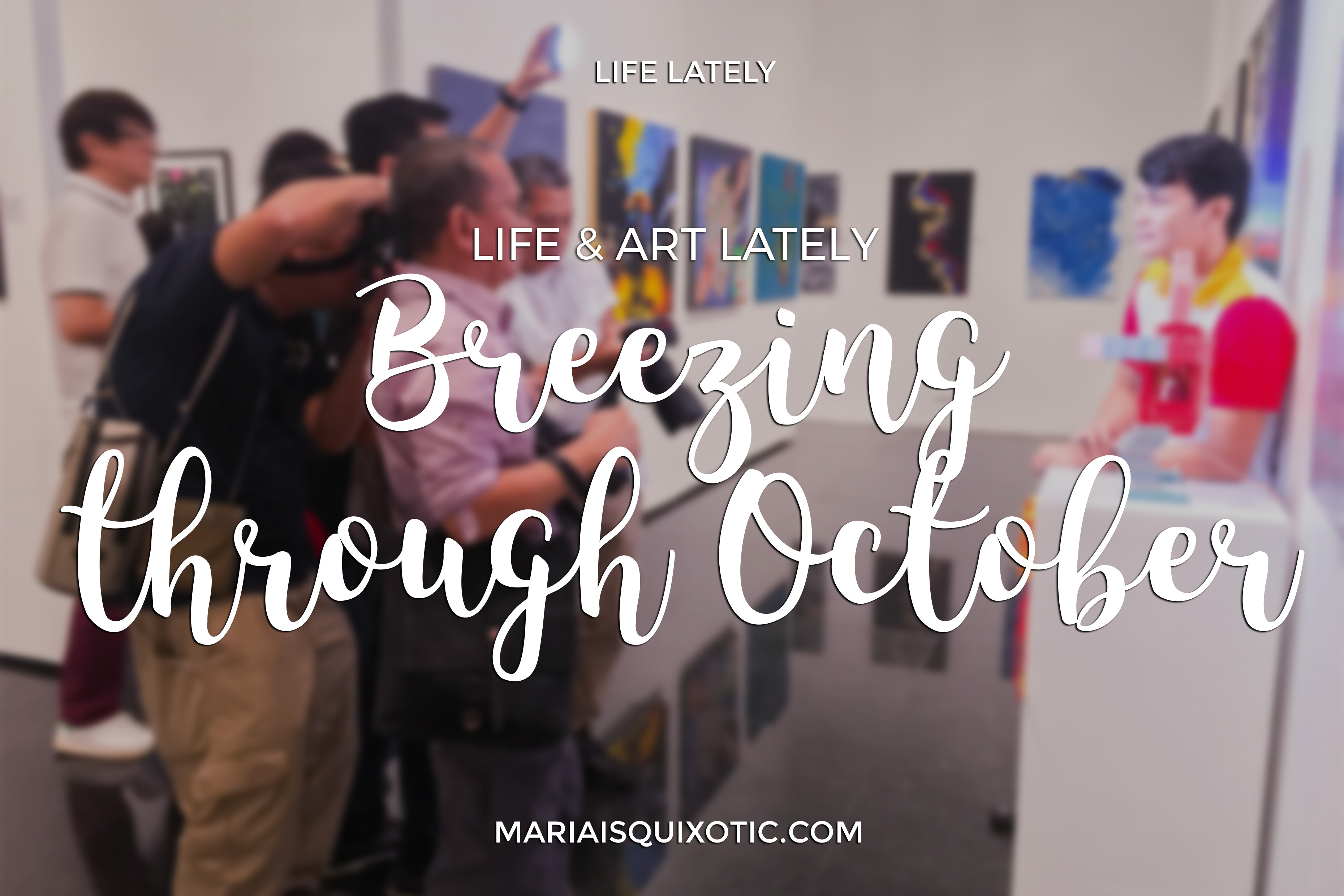 How has been life lately? It is already October and it seems like the months are just breezing through 2017. So, how have you been?

So how have you been dear readers and stumblers? I wonder how were you able to find this post in the midst of everything good and bad in the internet. Nevertheless, it has been quite a while since I wrote something about what’s going on lately. It shall be a pleasure to share something personal and giddy through this post.

October is the second -ber month in this second half of the year. Just a few months and it will be Christmas again. Mind you, here in our dear beloved Philippines, Christmas lasts for quite a while! Even at times that I don’t feel the holidays at all, it feels good to be home and just eating all the holiday food there is.

The past few weeks may have been a roller-coaster ride for me. Midterms was just over and work has been here and there and balancing my blogging life is another. You may say that I got a lot on my plate and that’s true. Imagine yourself walking in a buffet place looking at the yummy food you like from various cuisines. That is how my plate has been. Juggling various things from different facets of life. Being a creative and a somehow logical person in one can be a challenge.

But here are some notable things that I could deem be helpful and motivating to some. There may be some tools or applications that maybe mentioned that could be useful to you as well. Don’t forget to check those out!

Just recently, I received an email stating that we were invited to a media forum regarding the 50th Shell National Students Art Competition at Ayala Museum. At first, I did not know how to react on this. I do not remember signing up for an event related to this. So getting that email surely gave me butterflies in my stomach!

So what is a media forum in the first place?

This has been the question in my mind when I first got the email. It puzzled me on what could it be and how could we effectively participate and learn along the way. I’ve searched on the internet what it could be and I just realized that it could be another version of press conference. But since they used media, it would mean various forms of media. From print to websites or blogs and even to television, various media people were present! Honestly, it was a lovely experience! I met various people and saw a lot of remarkable and awesome artworks by students all over the country!

Notably, there was one scene during the whole event which truly caught my attention. As some may not know, it takes a village to achieve success. No man is an island and you cannot survive in this world alone. You can be independent but you also need some help and support from the people around you.

Seeing this made me realize that even to photographers, this could happen. I honestly thought that it only occurs to a group of friends who are really quite supportive for their friends. This happens to photographers who want to achieve that “Instagrammable” photo. There were giggles heard as well as laughter from the group of photographers capturing the memorable moments during the event.

I will give more details about the 50th Shell National Students Art Competition in another blog post! Stay tuned! 💙

October 17, 2017 – This is a memorable day for everyone who just loves pampering themselves. Every person in this country works very hard to the point that they would forget to take care of themselves. In the end, those who work harder end up thrice as tired. Sometimes, it would just burn out people if self-care was not a thing in this world.

Luckily, it was an honor to take part in this campaign and event. I never thought that this pamper day would actually decrease my fear about nail salons and spa. Not long before, I went to a salon and had some manicure and pedicure done. Unfortunately, may nails got murdered and I just ended up in pain. That was such a terrible experience and no one deserves that.

When the day actually came, I got excited as it has been quite a while since I gave my nails some pampering. The Nailaholics branch in Cash and Carry Makati gave such a calming vibe. Pillows in the booths were fluffed and added more to the relaxing vibe. Unfortunately, I got shy to take photos of the branch as there were other people there having their pampering done.

This day arrived just in time after our midterm exams.

I was with friends that day and it was a fun day! My boyfriend’s brother, Tyrone, had his pedicure too. At first, he was shy but when his turn started, he eventually sent us signals that it was such a great experience! His girlfriend, Nicole, was with us too and she opted for a manicure. She shared to me that her nails had never been pampered for quite a while. Honestly, she’s happy that I asked her to join me. What I had was a package that included manicure, pedicure and foot spa.

At first, I was shy because I am ticklish especially with my feet. So I told the ladies there that I could just giggle randomly at any moment. All the ladies who catered to our needs were kind and conversational. Although it could get quite crowded in that branch especially if it’s jam-packed with customers!

I’m definitely recommending Nailaholics to you. It is such a great experience that everyone must try for themselves. Therefore, pampering yourselves even for just once a month is healthy for your whole being. It could avoid burnouts and prolonged stress. In another sense, you will cheer yourself up too!

I forgot to mention that our event was a success! Soon after, it might be The Pen Meet 3 at a different venue catering to more people! Even if it has been weeks already since the event, it sure has some electric vibe and chills down my spine.

While balancing work and school, it has been giving me ups and downs. Sometimes, I feel more stressed and anxious every single day. Fighting through it could be quite challenging that sometimes I’d just cry at the end of the day. But here we are, we just keep going.

My other blogs may feel neglected but I’ve been fixing and organizing my stuff for a destash sale. I’ll be posting some items on MQ’s Shop real soon. Hope you’ll be giving a new home to my stuff real soon!

Now, I’ll be going back to work again and finish those backlogs. A little after that, it’s time to study again. Cheerio!

How about you? How have you been lately?

August 8, 2017
Previous Post 4 Ways to Streamline Client Onboarding in Small Businesses
Next Post 5 Ways Your Small Retail Business Can Prepare for the Holidays