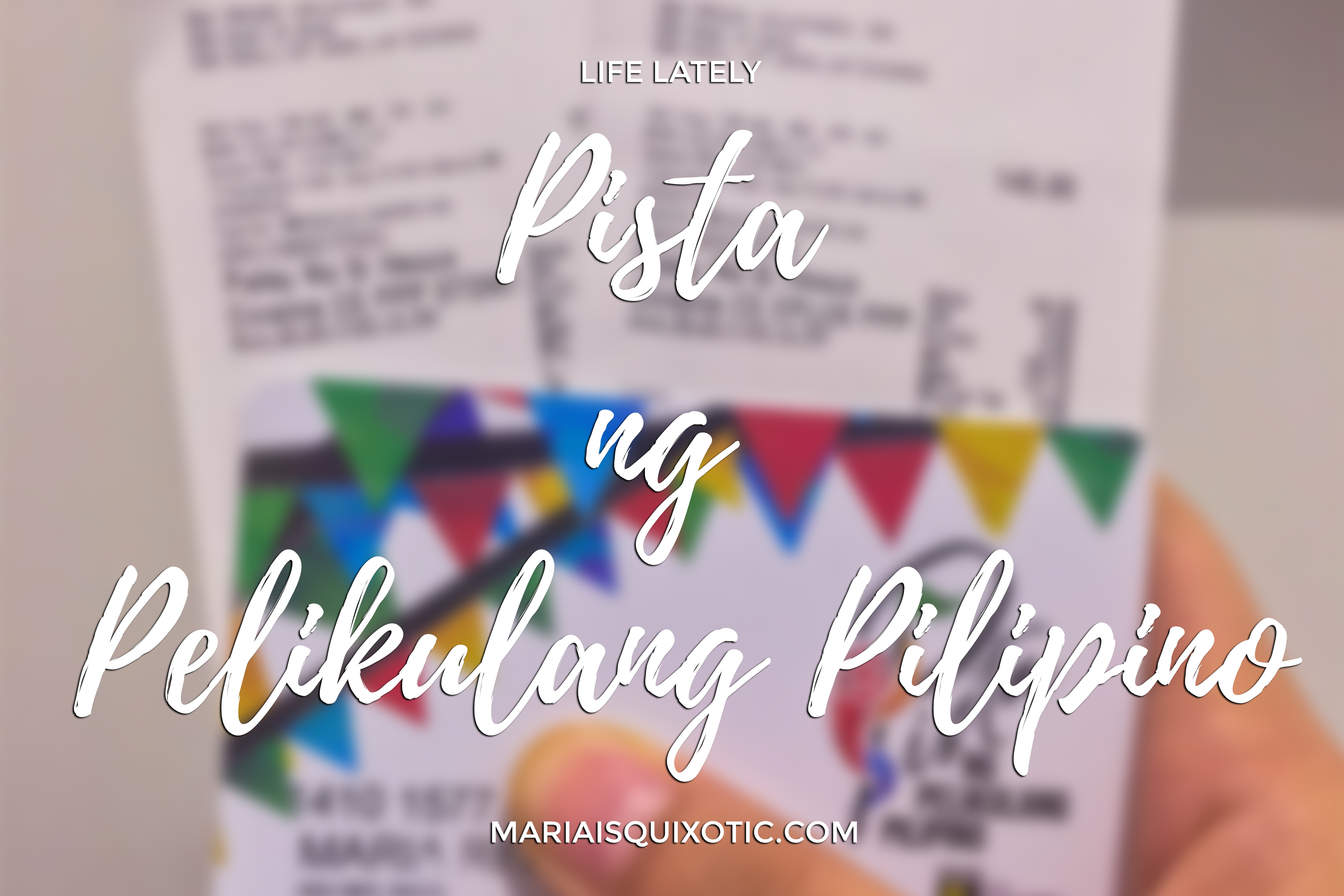 This August is the Buwan of Wika or the month where we celebrate our national language. I guess, this is one of the ways to celebrate our Pilipino heritage.

Disclaimer: Just in case a foreigner or someone who doesn’t understand Filipino will see this. I’ll try my best to include translations whenever there’s a Filipino word. Also, I would apologize in advance for any accidental spoilers.

From August 16-22, 2017, our nation has this event called Pista ng Pelikulang Pilipino. At first, I thought this is in line with Cinemalaya but it’s not. It is a different event that would allow independent movies to participate and showcase their creativity to the whole nation.

As I write this post, it’s already Aug. 22 which means the last day of this PPP. This will be some sort of review.

I am really excited about this since I have developed interest or love for local indie films. This interest was really jolted by iFlix. Their app contains Filipino independent films, old and new. Therefore, giving everyone access to the filmmakers who have been doing their craft for a while now.

You may wonder what’s the line up for this event. Don’t worry because I’ll be enumerating them for your reference. 😊

So here are my thoughts about the movies we watched.

This is the very first movie that we watched during this event. I made sure that even if I wasn’t able to join the block screening of our school, I’d still watch this. Anyway, without further ado! I present you, Bar Boys!

This is a film that’s about a group of friends who tried their luck with law school. All of them took the entrance exam and from there, their lives changed. The main characters are Torran played by Rocco Nacino, Christian played by Enzo Pineda, Erik played by Carlo Aquino and Joshua played by Kean Cipriano. Honestly, I forgot the last names of their characters and if I remember something, I’m not quite sure if it was the right one. So I’ll just leave their first names there.

What I loved about this movie

Truthfully speaking, I really wish that this movie was already shown before I got into law school. They adequately showed how life is when you are a law student. The experiences and dilemmas you’ll feel when you’ve begun your journey.

Plot wise, it really showed the character development and I truly could relate to all of them! I could not pinpoint to a specific character because every bit of them is happening in real life.

At some point, there was a very intriguing and eye-opening scene that would really show camaraderie. Some people may have their eyebrows raised for some things but I really gave this movie 5 stars!

However, here’s my wish in case they’d create another movie with some law school plot. I just wish that they would include a part about working law students. Some are not full-time students like the characters in the movie. To think of it, that’s another story to tell.

For international or foreign readers, it means:

Your biggest enemy is yourself.

That quote is so true and when that was uttered in the movie, I could not help but shed a few tears. It really struck me so much. Again, for the team who made Bar Boys, all I could say is you guys are the best! Thank you for creating a film about the life of a law student.

This is the second movie we watched during this event! We nearly did not watch this because Sam did not like “drama,” he prefers another movie but I’ll talk about that later.

A manananggal is a mythological creature from our folklore. It’s a female whose body could split into two. The upper part would have wings and would devour over victims and usually devour males, pregnant women. They would consume their hearts or the unborn fetuses. Also, they have bat-like wings which allows them to fly while looking for their prey.

The movie is about a woman who is a manananggal living in an apartment, specifically in Unit 23B. She then meets her neighbor. Both of them are wondering if they’d still be able to be loved and feel loved.

What I love about this movie

In this modern times, we’d usually hear about people who are mad at love or at the idea of it. Some would just prefer to be single but somehow, I disagree. At some point, we will be needing a companion in order to survive the world.

It’s because of the quote, No man is an island.

Also, this movie made me believe in love again. And if you’re wondering why, you have to watch!! I really hope they would have a dvd!

Those were the words that I could only think of when we finished watching the movie. It’s a comedic film that would have a restriction due to some scenes. I remember, it’s R-13 or R-16. Nevertheless, it did not fail to deliver!

Here’s the plot of the movie since I don’t know how to say it without those accidental spoilers. So I’ll just put what they have on their Facebook page.

When Iyay (Jaclyn Jose) learns that Hesus, her ex-husband, has died, she gathers her children and tells them they are going on a road trip from Cebu City to Dumaguete. No ifs or buts about it: they are attending their father’s funeral.

Her children – Hubert, who has Down Syndrome; Jude, a lovesick trans man; and Jay, who is living the bum life – join her with varying degrees of reluctance as she drives them in her extra-mini mini-van.

One unplanned detour comes after another, each pushing this family closer to confronting the past and figuring out how to enjoy the ride to an uncertain future.

To be honest, the movie is really hilarious!

What I love about this movie

I don’t know if I’ll still be able to say more about this but, I’ll try to enumerate it to make it easier a bit. 😆

I’ll stop there because I might throw in some accidental spoilers. ✌🏼 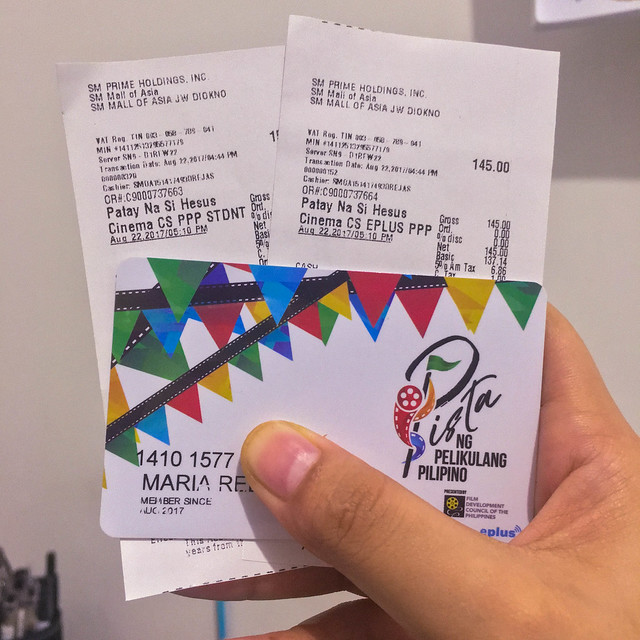 Our tickets and my ePlus card.

The movies were shown in SM cinemas and Ayala malls. For students, the movies would cost for Php 150 ($ 2.92) which is cheaper than the usual ones. Normally a ticket would cost Php 250 ($ 4.87) which is a heavy fee for students.

I got my card for Php 990 ($ 19.30) and comes along with six (6) free movies! Honestly, it really saves you a lot instead of buying the tickets one at a time! Another benefit would be, you’d access the priority lane just like the senior citizens or people with special needs.

What I am now hoping for is that this event would not fade as the years go by. I am already wishing that next year, another pista (fiesta / feast) like this would happen!

Our tickets are not sponsored. We bought it using our resources and all opinions are mine. 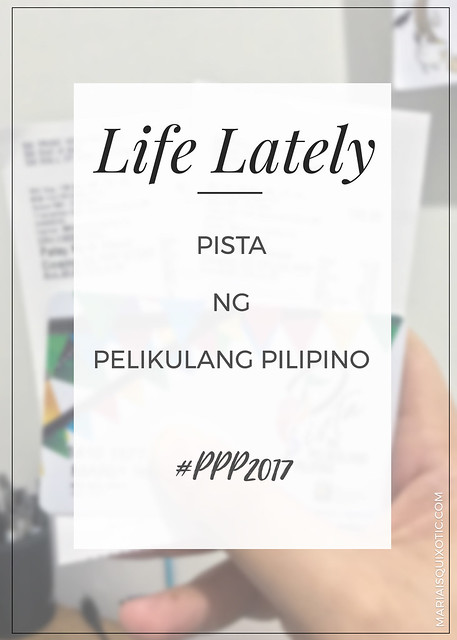 Now, let me ask you this.

What do you think about the movies?

Emerald City: Only on iFlix!

July 9, 2022
Previous Post Advantages of a Customer Relationship Management System for a Small Business
Next Post Tips on Time Management