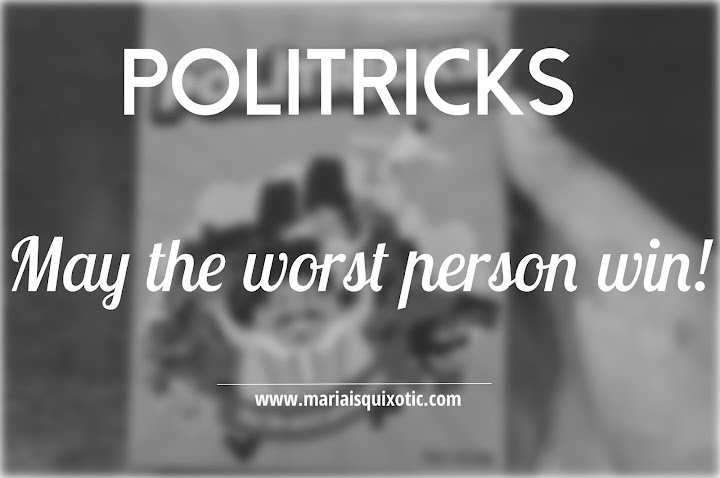 Last February 25, I experienced a whole new card game that could possibly take the country by storm and that is, Politricks!

Playing games is inevitable for almost everyone. We even play the silliest of all, why? Because we just want to have fun. Nowadays, there are the so-called drinking games, kiddie games, board games, card games and just all sorts of games! Yet, have you encountered a game that is so relatable because it is happening right now! Others may deny the fact that it is not happening but you just have to be keen to notice.

Politricks is a game made by Totally Wholesome Games which took them six (6) months to create. From conceptualizing to illustrating and to manufacturing the cards. The game allows players to be in the shoes of politicians who would pull some dirty tricks in order to win.

As what creator RB Ting has explained in a media forum last Saturday, “The game tackles all of the behind-the-scene stuff that happens in our politics.”

The game was inspired from the queries of TJ and partner PJ Lim’s friends. (We are talking about foreign friends who do not have any idea or insight on how our government works.) Thus, the game was formulated.

When we were taught how to play the game last Thursday, there was an instance that I was about to win yet I was defeated because of a toss coin. In reality, when there is a tie among candidates, a toss coin will be the way in determining who wins the position and who loses which is quite ridiculous in a way.In playing the game, you must also prepare your strategic minds in order to make the right moves and possibly win the game. Yet, there are moves which will make you cringe and possibly curse your opponents. I will personally not tell you since I don’t like to spoil the game. You have to buy it so you could know what am I talking about here.

The game serves as an eye-opener to those who are millennials and to the youth of today who needs to be well educated with what has transpired in the country for generations. Others may not know what EDSA revolution really was nor the Pork Barrel scam yet with this game, they could know little by little our history and how this country came to be as it is.

On the side of being a law student, I see this as alluring and amusing because applying what I’ve learning is quite tricky. There’s a move called TRO (temporary restraint order) which the judiciary issues to prevent someone from doing something to another and then there’s Bishop Opposes where it has the same function as the TRO but in reality, there is a provision in the 1987 Constitution which states that religion is separate from the State.

The ultimate goal is to have the most number of votes otherwise, you lose. And during the launch at Snacks & Ladders café, I had two (2) almosts. Two (2) chances of winning yet I end up losing. So maybe, just maybe, I’m not a dirty person. Well, politically speaking.

The moment I got home, I asked Sam to come over so I could teach him how to play the game. Sad to say, the first round was his. Just call it beginner’s luck. Then of course, I wanted a rematch so I put my heart, mind and soul in the game so I won.

Before I forget, there various ways to play the game:

How many players could there be?
How many cards are there?
What is Politricks about?
During the event, Bettina Magsaysay of ABS-CBN was there and the game was featured in Bandila. The video’s here:

Also, you may find Snacks & Ladders Café interesting as well:

They are located at: 188A Maginhawa St. Quezon City, Philippines.

I hope you guys will buy this game and play it!

And as the game says,

May the worst person win!