Gregory Park: Serious Grub is one of my all-time fave food places to go! They serve Mexican food. From tacos to nachos and to burritos, they have it!

This food place has been present in the metro since I was in college. Maybe, it was around 2014? Then there was a conflict so they had to close temporarily. They opened after their UPad booth but as a catering service. Then now, they are back in Taft! I’m hoping for good!

Currently, they have a place at 2 Torre Lorenzo. It may be tiny on the outside but on the inside, it’s filled with happy thoughts and sumptuous foods!

Gregory Park is a Mexican inspired bistro that aims to serve well-thought out, wholesome soul food. They also have a vegetarian menu for those who are vegans.

Back in the day, when they were still beside SDA, there were no vegan options on the menu. Now, they have expanded and welcomed food with a vegetarian twist to cater the vegans out there. It must be tough in a way to create a Mexican-inspired dish without the meat and all.

It was a spur of the moment where we went out, a girl date with no third wheeling from her boyfriend (who is the brother of my boyfriend). Small world eh? Haha! But anyway, we were strolling around Taft. Getting my notes printed and claiming my orders when we thought of going on an impromptu Taft date.

To everyone, Taft is a place where universities exist having various kinds of students. From those who talk like ganito to the ones who are makabayan na ganito magsalita. Regardless of the classifications or stereo-types, people would always reunite when it comes to food!

It was a typical day in Taft where you’d see students walking as fast as they could to catch up their class and not to get caught in the elevator traffic. So, we came from my place which is situated beside Sherwood and just basically walked. We passed by bookstores and other places before reaching our final stop before going home. Of course, that would be Gregory Park: Serious Grub!

Since, it has been a while since I last tasted their food, I ordered my all-time favorite from their menu. It was the Pulled Pork Burrito! Nicole had the Beef Supreme Tacos which is something new to my senses.

The burrito may seem to cost more but I assure you, it’s worth every penny! The serving is good for two (2) people already. It’s filled with veggies and even has a salsa and chips on the side. The pork is tasty and is not at all chewy or hard to digest. 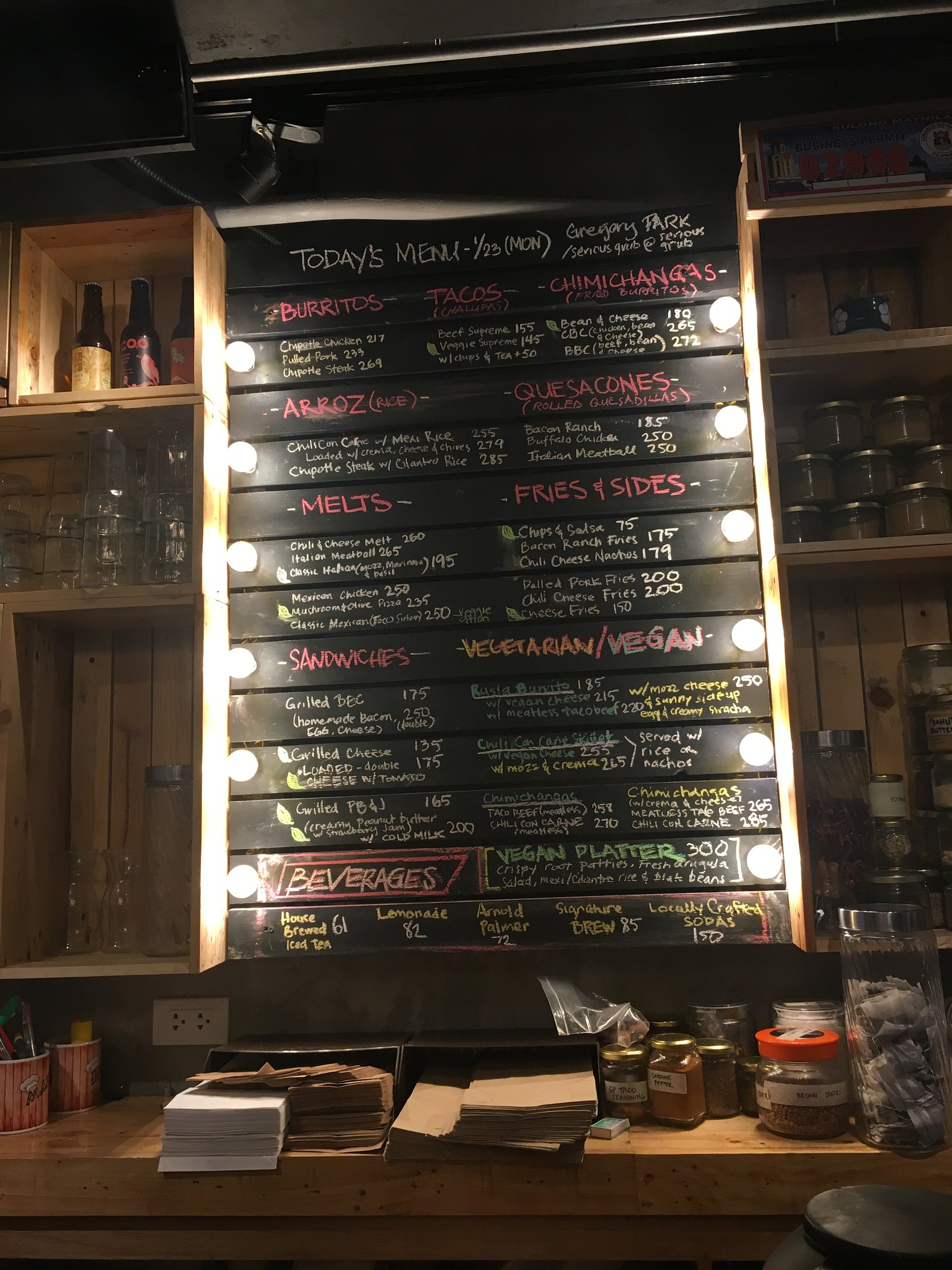 Their menu when we visited

As for the tacos, Nicole described it as delicious and very sulit! The taco shells weren’t that hard and weren’t too soft either. It was just right. The owners were the one cooking, serving and entertaining the guests.

Sulit is a Filipino word which loosely translates to “worth it” in English. 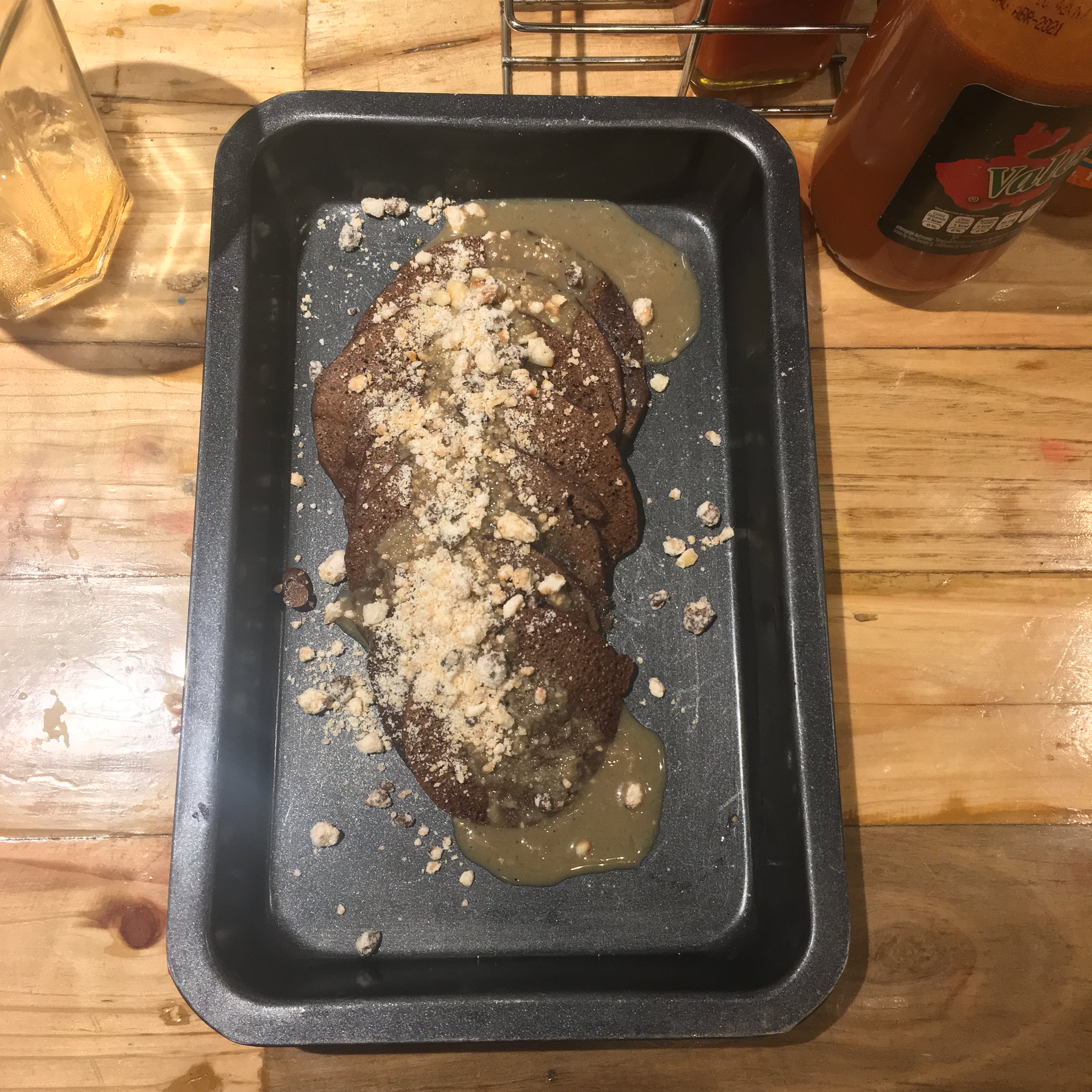 Scored some free dessert! Not on the menu yet.

Plus, their house brewed iced tea is great too! It isn’t what you’d normally taste. It’s not too sweet nor bland. It was just right. We got a refill since they were out of water that day and the delivery was late. (As usual, ’cause Filipino time) Haha!

You won’t get bored at all while waiting for your food to be served. You could converse with your buddies there while watching what’s showing on their screen. Or if you are such a conversational, you could talk with the staff there and get to know them and the history of the place. 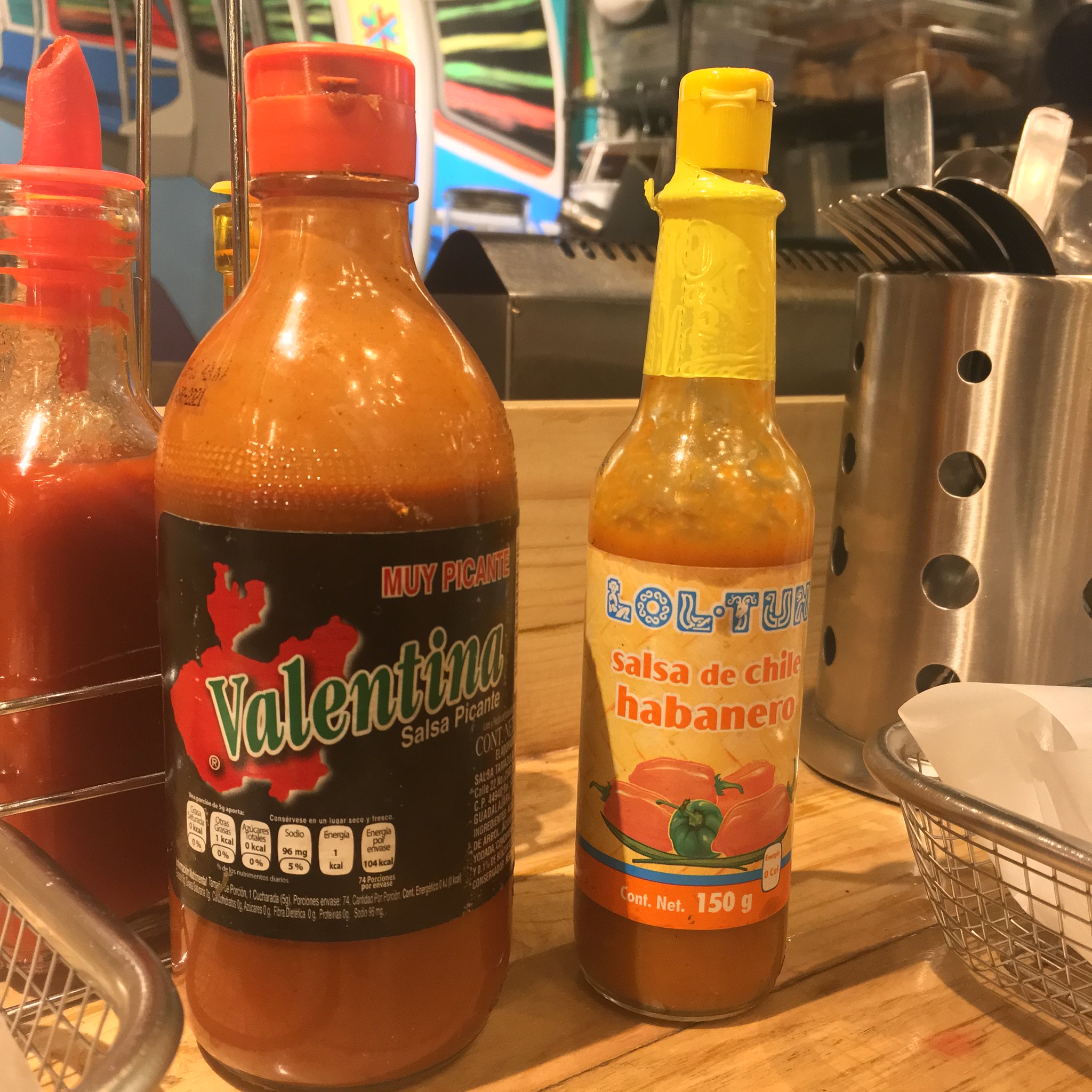 Variety of hot sauce from Mexico

I’d recommend this to you guys if you like Mexican food or Mexican-inspired food. It’s a great chance to try them out because their menu changes almost every day. If not every day, every week! This means, you have the chance to try something new every day or every week. But of course, be careful on spending. I wouldn’t want you to go broke at once.

They are located at the ground floor of 2 Torre Lorenzo in Taft. The building is in front of De La Salle University and beside Banco de Oro (BDO). You’ll know it’s 2 Torre when you see the Fully Booked branch in front. ☺️

Disclaimer: This is not a sponsored post. We used our own money to buy our food. It just felt right for me to share and blog about them because their food is worth sharing.

Would you try them out?