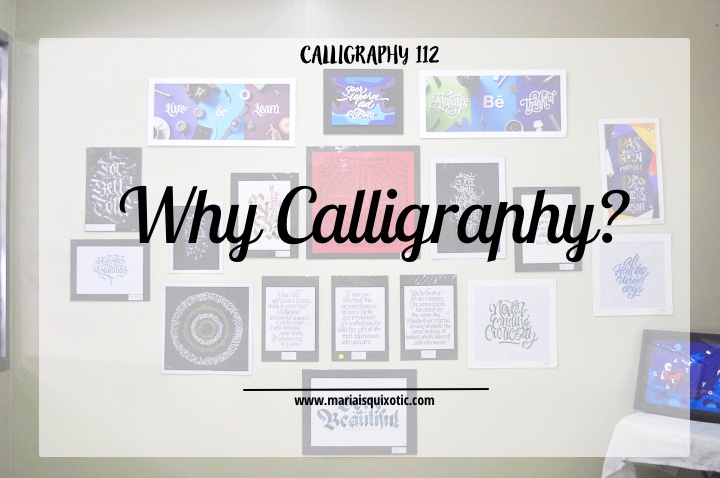 Another Thursday, another post for my calligraphy adventure. This week’s won’t be featuring any tips or tricks or discoveries about my journey but it will be about on how calligraphy, the craft itself, helped me to be the person I am today.

It has been almost a year since I have been practicing calligraphy and I am so glad that I did! If not for an impulsive yet curious move back then, I won’t be able to have met new and amazing calligraphy friends.

Truth be told, this adventure started when I got curious about the craft when I saw some people on my Instagram feed doing it and reposting some of it. Then it hit me, I told myself that I am creative in my own way and I need something to help me ease the stress I’ve been receiving in a different way. Usually, I would turn to my piano whenever I’m stressed yet this time, I can’t. It’s in Legazpi, so many kilometers away and a flight would cost a million if done impulsively. And since my partner is into design, I was curious to let my more artsy side come out. Then eventually, on my birth month (last year), I decided to buy a scribbler starter kit from The Craft Central.

Before trying to learn brush calligraphy or lettering, I was trying my best to do the dip pen calligraphy or pointed nib calligraphy to some. It may seem hard to imagine that a person like me in a school environment like that would have the time to do such things. Yet believe me, I managed and somehow conquered that issue that others may have been concocting in their minds.Sometimes, assumptions cloud our minds into thinking that someone should just do the one thing that is currently happening in their lives but I don’t think that should be the way.

The stress, sadness, pressure and all the negative vibes can be released when you do something that you’re happy with. It makes me laugh a little because back then, I would deliberately say that art and/or a craft like this will never love me up until I tried to debunk that. I started opening up again for the craft that I thought I would never do in a million years.

It really helped me surpass all the sadness, pressure and the stress that has been taking over my mind for quite some time now. From getting scared of being rejected or even feeling a big disappointment took me by storm and calligraphy helped me to be better.

The colors that I have been seeing when I’m experimenting with watercolor (as ink) are like pigments of color that have been lost while I was looking for the adventure of a lifetime. Having friends who share the same endeavors as I do is one of the best feelings in life.

Not all people understand the benefits of having an artsy side that co-exists with your other life.

It’s like being Hannah Montana and Miley Stewart. You double life. One who works a corporate job or some job that is way out of your league or the degree that you finished, and the other is a life that you’re carefree and happy with what is really in your heart. You would want to pursue it yet there are so many barriers that are keeping us away from that life.

The discipline that calligraphy teaches us is quite different from the others out there.

You won’t simply get frustrated by some pen that’s not writing properly. You’ll soon discover that the problem is not just merely with the pen but with the person itself. You’ll learn to be patient when you let your works dry up before you work with them again. You’ll be meeting or connecting with different people through different ways when it comes to gaining information about improving at the craft itself. Soon, you’ll find yourself going to an exhibit about the craft and getting a chance to meet the people you have been following for so long. You’ll get the chance to interact with people who have been sharing the same interests as you are and get the chance to learn from them and have art dates with each other. You’ll get to know more people and relate to them more.I’m proud to say that I have experienced these and it’s because of calligraphy. It has been a great journey with calligraphy and it helped me a lot in dealing about life.

How about you? Have you tried something new that totally changed your life?

P.S. Photo of Scribble Kit is from The Craft Central site.

How To: Take Care of Your Pens

My One and Only