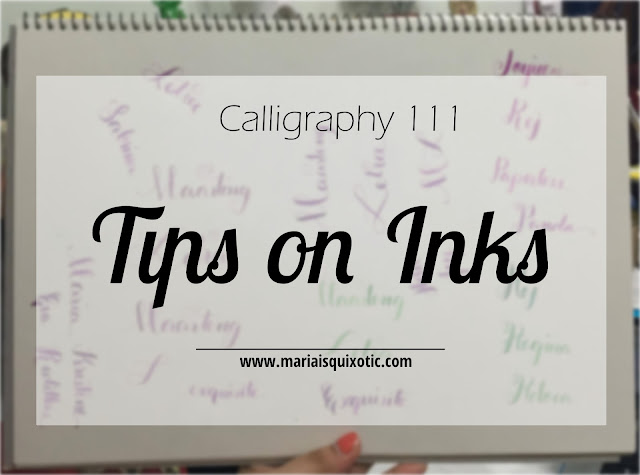 This post will entail about the choices of ink that I have made and also the things I discovered that may be used as an ink and how do I do it.

My friends Sab and Yen whom I have met thru Type Kita last year were having their somehow quality time one Friday night at TOP while I was reviewing my ass off for an exam the next day. This is how their clutter looked like:

With this spread, I was inspired and motivated to experiment also. With the Holy Week break, I was practicing on the drills and the basic strokes with the dip pen calligraphy using various inks.

I experimented on using:

And recently, a dear friend of mine told me to try Sumi ink because it does not bleed and it’s waterproof! Also, for fellow calligraphy enthusiasts or artists there, there’s Sumi ink in Daiso which is cheaper than the ones being sold on various sites.

With the colored inks from The Craft Central, I had some not so good experience with it since I just used the ink directly from the bottle. When I tried to write, it bled and the outcome was pretty devastating. I was even using the pad from Ink Scribbler which you can buy from National Bookstore.

Well, here’s a hack or a tip from a fellow enthusiast so you will not get sad about bleeding or smudges using that ink.

Here are the materials you’ll be needing:

I will have be to honest with you that I have forgotten to take photos because it happened all of a sudden during one of the art dates with my friend, Christian who gave me the idea about diluting the ink so it won’t be so strong.

Here’s what you have to do:

For the watercolor ink:

Just be quick in using since it quickly dries up so since it’s getting hotter, might as well have more water prepared than to be sorry.

There’s a sample of my attempt with watercolor as ink.

So that’s how it worked for me. Through my Snapchat, I have been posting how my practice sheets look like and how my art clutter looks when I’m practicing.

And as what one of the people I admire would usually say:

If you follow him on Snapchat, you’ll see how amazing his works are and why I’m always motivated to practice!

Remember, everyone has their own unique style of writing. Use that to your advantage when you practice.