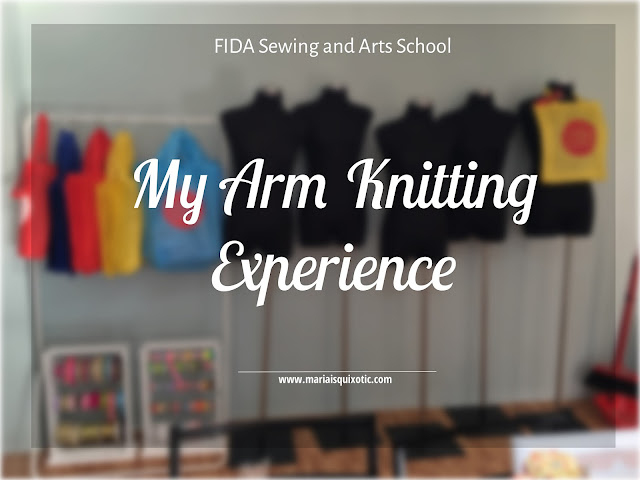 Having you tried doing something new for the first time? This post marks another first for us!

Last April 15 (Sab’s birthday as well), we were invited by FIDA Sewing and Arts School in Silang, Cavite to be with them at their open house event. Luckily, we were also invited to join the arm knitting workshop. We were taught by the lovely Leanne. I honestly admire her for the patience in dealing with my leftie problems.

It as quite an adventure for us since it’s our first time to explore another part of Cavite which is not very familiar to us. But the adventure was worth it since we got to meet amazing people who are gifted and enthusiastic about arts and crafts like us. Oh and btw, I was with Sab of The Sab Stuff (and her boyfriend) and with Yen of DnY Arts and Crafts.

We were greeted by so many artsy stuff there. Up to the food which were served on cute paper cups and some were place on palettes!

For the workshop proper, Leanne taught us knitting but not just the ordinary type. We were taught to knit without the needles or hooks but with our arms! Yes, with our arms! The project was to make our very own scarf through arm knitting. Leanne told us about this video tutorial on Youtube wherein a person does knitting with her arms and we were all flabbergasted about that.

We were asked to pick the colors for our yarns. I had the blue one, Sab had the nude, Jeth had the pink and Yen had the purple one. We were all astonished by our progress yet there were also confusions with the steps since there were transferring involved, looping, grabbing and crossing and even letting go!

Most of us encountered those confusions and errors and I think I was the one who had most of the trouble since (first of all) I’m a leftie and they were all righties. Looking at them motivated me that even though my orientation if different, I could still do it. My scarf was kinda messy since there were loose knots and tight ones but the finished product was amazing! Of course, super thank you to Leanne for helping me close the scarf.

Have you tried doing something for the first time? Thank you @fidastarosa for the wonderful knitting workshop! Oh and hello there @sabescoto and to my scarf! 💙
A photo posted by Kristine Redillas (@mariaisquixotic) on Apr 16, 2016 at 5:01am PDT

Words can never describe exactly how we felt about knitting for the first time using our own arms. And truly, it’s always an adventure to try something new, not just a new hobby but also a new place to go to.

Now, here’s how to reach FIDA Sewing and Arts School in Silang, Cavite:

How to go there (our version):

If you are coming from Taft, just ride a bus along Vito Cruz cor Taft Ave (in front of Torre Lorenzo). Make sure the bus has “ATC” or “Alabang” on their signage. Just to be sure, you may ask the conductor otherwise. Fare is Php 47.

Since this was our first adventure together, we asked around just to make sure. For this, we asked the people in-charge of queuing the passengers just to be sure. We were lucky to have ridden a kind driver who taught us on what’s next. Fare is Php 50.

There’s a walking distance to the tricycle station and they will take you directly to the location where FIDA is. The tricycle ride was long enough to be able to take power naps in between and also to appreciate the view that you’ll see (or I’m just a nature lover). The driver (A) asked us for Php 50 each (going to and fro) yet when we got to talk to the other one (B), it was supposed to be Php 19 each. We were dismayed yet it was okay since we asked driver A to pick-up us at Stanford Suites when were going back already.

How to go back to Manila:

The fare going to Balibago area was Php 50/pax since we were naive then. Yet, when we opted to go to the terminal to send Yen off, we were only charged at Php 10/pax.
Since Sab, Jeth and I were Makati-bound, we went down at Makati area near Dusit Thani and just walked to Glorietta where we bought our food at Mercato. The bus ride was smooth and really quick but when it reached EDSA area (we all know what means), the traffic was terrible! I was asleep the whole ride so my fare was paid by Sab & Jeth. If I were to guess how much was the fare per person, my estimate would be around Php 50/pax also.

As they would ask, have you tried doing something for the first time?